Previous Why don’t countries want to tax Amazon? (Part 1)
Next Did the FBI have access to the Panama Papers?

Part 1 of this over-long post asked how serious some large economies actually are about implementing the ‘BEPS’ package to tackle international corporate tax avoidance, which they agreed in 2015. There’s much more granular information about these reservations, of course, in the matrix of existing ‘opt-ins’ and ‘opt-outs’ for different parts of the package, revealed in the OECD’s Multilateral Instrument (MLI).

There’s a vast amount of analysis to be done here to assess the most significant of the mismatches and loopholes that the MLI will sustain or initiate. But the number of opt-outs from each different part of the treaty already tells us in more detail about the disjuncture between rhetoric and practice that I started with. Which are the international tax avoidance remedies that governments have publicly supported in the BEPS process, and yet are most disinclined actually to implement in practice? 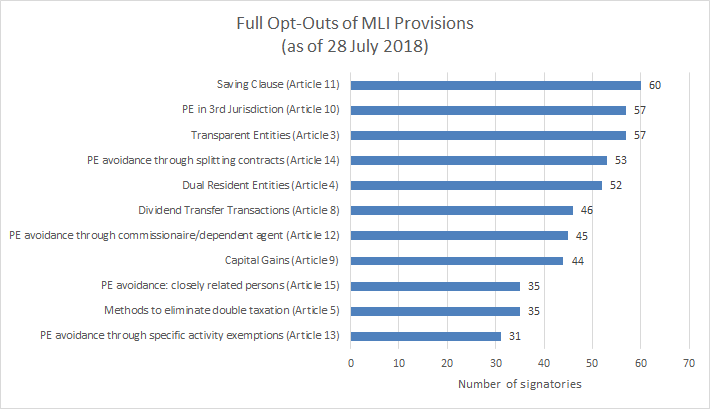 Full spreadsheet for this analysis is here.

Definitions of/qualifications to the right of signatories to tax their own residents (the ‘saving clause’) are evidently the most unpopular. Given that most OECD-model treaties already have an (analogous but shorter) saving clause, I’m not sure where this opposition comes from: perhaps signatories feel that the list of exemptions to this right in the MLI version is too expansive, when compared to the existing ‘saving clause’ in most OECD-model treaties. Or perhaps they simply feel it’s duplicative.

Similarly unpopular are measures intended to tackle abuse via tax-transparent entities, shift income/assets to PEs in low-tax third jurisdictions, and avoid taxable PEs by splitting up contracts. It’s possible that signatories felt that the (mandatory) principal purpose tests provided for elsewhere in the MLI would cover some of these problems adequately.

More interesting, though, are the measures in the middle of the graph, with between 40 and 50 opt-outs. These are interesting because their opt-out rates indicate maximum dissensus amongst signatories, with around half of them endorsing the measures and half rejecting them. Probably the most significant of these, policy-wise, is Article 12, which deals with the avoidance of a taxable ‘sales PE’ through commissionaire or dependent agent arrangements: the ways in which multinationals can make sales into particular jurisdictions, and even register subsidiary companies, have ‘marketing employees’ and maintain some infrastructure in those jurisdictions, yet book those sales in a low-tax jurisdiction somewhere else. As the U.S. tax court found last year, the sales practices of companies like Amazon in European countries constituted such ‘commissionaire’ or ‘dependent agent’ arrangements (depending on the provisions of civil or common law). This is of course a huge area of debate and tax dispute, not only in relation to the ‘digital economy’ but also to companies from Dell to Pfizer, which sell their physical products through “bricks and mortars” warehouses, distributors and marketing executives; but which nonetheless book taxable sales in jurisdictions other than where those sales are made, and where their warehouses, distributors and marketing executives are based.

Here’s how the MLI signatories are split on Article 12:

Some of the opters-out, like Ireland, have insisted that they’re not opting out (for now) because they don’t want to tax Google and Amazon, but because they’re unsure about the impact and efficacy of this measure until the BEPS work on attributing profits to PEs (Action 7) is complete. Yet the final Action 7 report on this subject – agreed by consensus by all of these opters-out — has been out since March, and there’s no evident move by Ireland or other opters-out to opt back in.

Instead, there seems to be a political economic rationale to the way in which the signatories divide here. This is, to some degree, a split between lower and upper income economies. More strongly, though, there’s a split we could characterise as “havens + large economies” (mainly opt-out) vs. “small economies”. Broadly, it seems to me that this maps to an emerging international political economy which divides those countries which reasonably anticipate they’re likely to gain economic activity from hosting ‘booking centres’ or headquarter companies of MNCs operating in this way; and those more likely to be ‘sold into’, without getting the opportunity to act as headquarter jurisdictions or booking centres. There’s some analogy between this and the more traditional divide between capital-exporting and capital-importing economies, but it’s not precisely analogous. And it cuts across Martin Hearson’s ideas about “market countries” vs. the rest: there are ‘opt-out’ countries with big consumer markets, like China and South Africa, which would have some interest in taxing sales where they’re made, but may more strongly want to protect Chinese or South African-headquartered MNCs selling into the rest of the world. And there are straightforward political preferences at play here too: France, for instance, has opted in (unlike Germany and the UK) — consistent with its efforts, with mixed success, to claim that Google and Amazon have taxable sales PEs in France.

The MLI makes it very clear that there’s huge unfinished BEPS business. This is not only in the area of taxing the ‘digital economy’, where international policy disagreements are much discussed at the moment. More fundamentally, countries still disagree over how business models, traditional or not, are to be taxed in a world where business functions are much more mobile and dispersed: what we might call the ‘communication economy’. Which is everything. In this respect, the tax policies of traditional ‘treaty havens’ to capture economic activity – preferential regimes, wide-open treaty networks – look increasingly like the forerunners of tax strategies growing in prevalence in mainstream larger economies too. Meanwhile pressure from smaller “sold-into” economies for a tax slice from these business models isn’t going away any time soon either.

UPDATE, 30/07: for completeness, I should also add that, of course, Article 12 is not the only part of the MLI that might alter the taxation of Amazon-type sales structures. Changes to the PE specific activities exemptions in Article 13, of course, might also help turn Amazon fulfillment centres and marketing operations into sales PEs. These have received more opt-ins. It’s the *dissensus* around Article 12, though, that I find interesting.