Previous The assault on al-Hudaydah: does the UK government have an off-switch?
Next Why don’t countries want to tax Amazon? (Part 2)

Back in 2014 – when OECD member states were in the midst of negotiating the ‘BEPS’ package to tackle international corporate tax avoidance — I wrote about an odd cross-current in attitudes towards corporate tax reforms amongst some parts of the business lobby. Everyone, it seemed, was now firmly of the opinion that transnational corporate tax avoidance was a Very Bad Thing. There was near universal acclaim for the OECD’s BEPS project. And yet many multinational companies, as well as representatives of the accountancy and tax law professions, seemed to oppose reforms that would affect the activities of more than a small minority of corporate taxpayers. BIAC, the business lobby group at the OECD, went so far as to argue in relation to tax treaty shopping that the hallmark of a well-designed BEPS measure against treaty abuse was precisely that it would have a limited impact on the majority. If everyone’s at it, it can’t be tax avoidance.

Though it wasn’t so apparent then, it’s since become clear that many governments have also been bold in rhetoric and conservative in their commitments. Having agreed in 2015 a 15-action package of international tax reforms, national-level implementation of this package has since been patchy, even amongst the core OECD+ members who negotiated the BEPS package by consensus. This patchiness hasn’t, perhaps, been remarked upon enough. It’s hard to keep track of national laws in dozens of different jurisdictions, and though the OECD does some monitoring, it’s currently incomplete even for the four strands of the package the OECD has designated the “minimum standards”. There’s been much NGO criticism of the lacunae and timidity of the BEPS package, but relatively little scrutiny of whether governments are actually implementing the standards, however partial or timid, that they’ve endorsed.

The patchiness is eye-wateringly clear, though, where governments have had to put their money where their mouth is and sign up to a raft of multilateral measures in order to put BEPS measures into their networks of tax treaties. They’ve done this, of course, primarily through the Multilateral Instrument (MLI), a ‘treaty of treaties’ opened for signature in 2017, which modifies existing bilateral tax treaties between signatories in order to implement various measures in the BEPS package. The MLI currently has 83 signatories, and entered into force on 1 July 2018.

Worried about dissensus (despite all the core BEPS negotiating countries having already, in theory, agreed in detail the principles and mechanisms behind all the measures), but desperately needing to get a deal, the OECD’s ingenious solution was a kind of à la carte treaty, which takes existing practices of reservations in public international law to an entirely new level. The whole purpose of most treaties is to establish common international standards. By contrast, signatories to the MLI can subscribe to, or reject, most individual clauses of the treaty separately (with the exception of a small number of “BEPS minimum standard” provisions). In some cases signatories can select from a menu of different options within each clause, according to their particular preferences and fiscal interests. Jersey wants to look BEPS compliant but still keep the door ajar for hybrid entity mismatches? No problem: it can reject Article 4 of the MLI, which modifies the residence rules of OECD-standard tax treaties to include the location where a company is incorporated as a factor in determining its tax residence, rather than simply the location of its ‘effective management’ (central to schemes such as the famous “Double Irish”). And so on.

In some cases, of course, opt-outs may be motivated by the desire to keep stronger anti-abuse provisions in a country’s existing bilateral tax treaties, or to avoid duplication. In many cases, however, they reflect unhappiness about the anti-avoidance provisions themselves. The result is a patchwork of different provisions in thousands of bilateral tax treaties: possibly more mismatches, indeed, than before the MLI, when these treaties stuck fairly closely to OECD or UN models with more limited room for manoeuvre. There are 75 different possible options for signatories to opt for in the MLI, and 83 signatories so far. Crudely, that’s 7583 different possible configurations. Far fewer in practice, because some positions would be internally contradictory. Nonetheless: billions of different possible matches and mismatches. The MLI is probably the first international treaty where a government needs a piece of software to tell it what it’s agreed with any other given signatory. (Which itself raises serious questions about how its impact could ever be assessed in a meaningful way for the parliamentarians who, with few questions for the most part, are now ratifying the treaty).

Below is what this looks like schematically. Each row is a signatory state, and each dot is that state signing up to a particular option under a given article. Take a step back and recall that the OECD initiated BEPS “to close the loopholes in the international tax system”, in the words of Pascal Saint Amans, the OECD’s head of tax policy and the architect of the BEPS process. What causes these loopholes? “Mismatches in tax rules” between different countries, the OECD tells us. 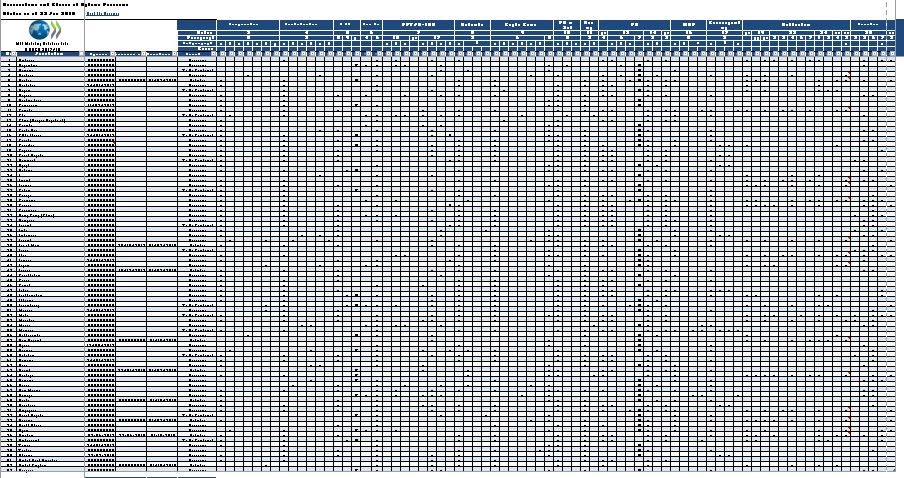 Loopholes? Anyone for any loopholes?

Tax scholars far more eminent and qualified than me will be poring over the preferences and their political economy revealed in these tables for years to come. In the “wild”, however, we’ve already seen how particular MLI mismatches will allow tax avoidance structures to persist or to grow in the future. Take the “Single Malt” structures that several U.S. multinationals have set up via Ireland and Malta since 2015, a possible replacement to the “Double Irish” as a way to avoid international profits falling within the U.S. tax net. The “Single Malt” relies in part upon a tax residence mismatch between Ireland, Malta and the USA. Such mismatches will be sustained under the MLI because even though Ireland has signed the Article 4 of the MLI as part of its efforts to clean up “double Irish”-type structures, several of its tax treaty partners — including Malta — have opted out of Article 4. And since Ireland has opted out of Article 12 of the MLI, which aims to tackle some structures that allow U.S. multinationals to book sales all around the world through Ireland – the first stage of most “Double Irish” or “Single Malt”-type structures – the other essential working part of these structures will likely remain viable too, despite efforts by other countries to clamp down through Article 12.**

The geography of the opt-outs indicates, unsurprisingly, that a core of traditional tax-havens or treaty-havens have gone for the maximum 11 opt-outs (Seychelles, Panama, Mauritius, Malta, Jersey, Isle of Man, Hong Kong, Guernsey, Cyprus) or 10 opt-outs (UAE, Switzerland, Singapore, Monaco, Liechtenstein, Barbados). At the other end of the scale, all lower-middle income or low-income signatories except Georgia, Pakistan and Ukraine have 4 or fewer opt-outs.

Several large European and North American economies, however, are also maxed-out on their opt-outs. The Nordics seem particularly to hate the MLI’s provisions: Denmark, Sweden, Finland and Iceland all have 10 or 11 opt-outs (though Norway is down on just 2); as does Canada, alongside EU accession states in central and eastern Europe, presumably concerned about the tax competitiveness of their economies.  Big beasts Germany, France and the UK are in the middle with 5 or 6 opt-outs.

(Full spreadsheet for this analysis is here. I’ve excluded here a number of opt-outs for entry-into-force provisions or other procedural aspects of the treaty, significant though they may be; and for dispute resolution methods).

The cleavage in opt-ins/opt-outs, in other words, appears to be not so much between tax havens and non-tax havens, but between wealthy and poorer countries, with a smattering of wealthier countries (New Zealand, Netherlands) also seeking to implement the treaty to the maximum. In short: poorer and smaller economies, excluded from the OECD table during the substantive negotiations of the BEPS package prior to 2015, are ironically amongst the MLI’s most assiduous implementers, compared to the large economies which did actually sit at the table to agree the package.

In a second post I’m going to look at how countries divide on one particular measure in the treaty — which tells us more, I think, about the emerging international fiscal landscape.

**(Yes, I do think that changes to U.S. Subpart F, or the necessity to implement third-country anti-hybrid provisions of the EU’s ATAD2 Directive, may challenge these structures in the future. But that’s still to be seen).