Previous The world turn’d upside down
Next Tahrir ammo

In at least two ways, ordinarily:

Over the past couple of years, though, I’ve found myself excited and impressed by the increasing possibilities of a third way: more democratic, more collegiate, and less indebted to the agendas of individuals or to the power of the state.

A pioneering example of this has been watching nuclear weapons. Verifying the condition and location of strategic weapons is a critical component of counter-proliferation regimes, helping to prevent the degeneration of trust that can fuel arms races and worse. Despite nuclear powers’ big words about the value of verification, nuclear weapons treaties (unlike those covering chemical weapons) tend to have comparatively weak verification regimes. And so since the late 1970s, frustrated by the opacity of their governments’ nuclear arsenals, networks of activists and enthusiasts – these days often little old ladies (and gentlemen) living in anodyne places like Colchester and Wichita – have got together on both sides of the Atlantic to undertake continuous “citizen verification” of the UK and US’ nuclear weapons – simply by observing, photographing and recording the movement of trucks and trains carrying nuclear warheads and their accessories around national road and rail networks. Sharing information about a nuclear convoy in real-time through phone trees and email lists, different observers in the network can alert each other, tracking nuke movements right across the country.

The nukewatchers’ efforts are part protest, part verification. But they’re more than symbolic. While they can’t come up with definitive weapons inventories – it’s not wonk-grade intelligence – the nukewatchers have been able to provide approximations of deployed warhead numbers; logs of warhead servicing; when and where they’re redeployed; and spikes in transport activity that often indicate the timings of upgrades or decommissioning.

And they were doing it in the 1970s: contrary to a lot of interwebguff, Web 2.0 didn’t invent this kind of socially-networked observation. But declining technology costs and online organising have, I think, made life far easier for these kinds of initiatives. Hobbyist plane spotters, famously, provided the data that exposed the unlawful rendition programme. They had two things in their favour: internet fora to share flight logs and photos, piecing together transnational flight plans that aren’t publicly available at all, or even available in one piece to a single national authority. And rapidly declining technology costs: the plane nerds are no longer just stood at airport fences with pencils and binoculars, but with digital SLR cameras making high-quality photos uploaded instantly onto photo-share sites; cheap UHF radio scanners to listen to the chatter between pilots and control towers; and, since 2004/5, laptop-ready aircraft transponder receivers (I bought one myself down the Edgware Road – for 350 quid I can receive the transponder codes, call signs, altitudes and flight bearings of aircraft 100 miles away. And if there are hundreds of us across the world with transponder receivers, we can get together online, feed in our data, and track aircraft globally, in real time, for free). 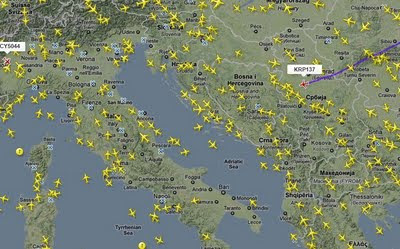 We can do the same with ships, using their AIS transponder system, although the networks are less well-developed than those of the plane spotters. I’ve used these data feeds to help identify mid-conflict weapons deliveries to Sudan and the Middle East; and to track the movements of ICC indictees and under-fire newspaper executives.

And similar stories can be told about the amateur astronomers who map the proliferation of secret spy satellites.** Or the amateur ‘bucket brigades’ compiling simple air and water pollution data, from Thailand to Poland, to challenge industrial polluters. In a looser, more unstructured way, the collation and circulation of cameraphone pictures and videoclips taken by demonstrators in news-neglected places like Guinea during the ‘28 septembre’ massacre, and more recently in Yemen and Syria, have in the absence of TV cameras served as insurance against regimes’ attempts to lie about oppression and killings.

The nukewatchers are salutary pioneers precisely because one might imagine that nuclear weapons were one of the hardest targets for radical curtain-twitchers. You’d think that citizen surveillance would have to go after softer targets: council service provision, for instance. But what the nukewatchers realised, early on, is that even the most sensitive of state and corporate arcana are often conducted in full view – often, in fact, right outside their wisteria-covered front doors on the A357 to Basingstoke – if you just know where to look. As the NYT pointed out about the satellite watchers, they realised that just by looking in the right place, carefully compiling data, and sharing it in networks, they could “uncover some of the deepest of the government’s expensive secrets and share them on the Internet”. How glorious is that?

Steve Mann and other privacy activist-artists coined the term ‘sousveillance’ in the early 2000s to describe citizen efforts to gaze back, from below, at the gaze of the state. Mann and his collaborators use devices and routines – body-worn cameras, computer programmes that automatically activate recorders and sensors when citizens interact with bureaucrats and officials – to subvert surveillance, to turn the power of information collection back at the watchers. I think citizen information-collection networks are doing something similar. But Mann’s model of sousveillance is individual, not collective: designed to alter the dynamic of individual encounters with official surveillance, and to protect the user (the state is always penetrating and male etc. – there’s a great picture of a highly conspicuous bra-cam in one of Mann’s fake souveillance company brochures). Successful architects of official surveillance recognise that if you’re interested in gathering information, rather than just intimidating or altering the behaviour of the surveilled, only networked surveillance, producing pooled and organised data, is really effective. For every decent lawful intercept system, you need an Echelon database. The same goes for the networked, organised sousveillance I’m talking about here.

Meanwhile the intent to ‘sousvey’ is rather less important than in Mann’s techniques, which are specifically designed to gaze back, to be deployed in ‘surveillance environments’ themselves. The enthusiasts and obsessives involved in networked citizen information-gathering, by contrast, are not always doing it to poke their finger in the state’s all-seeing eye, or even to uncover wrongdoing. Plane spotters and satellite watchers are mostly just interested in planes and satellites, and in mapping and understanding the systems that organise them.

This kind of networked sousveillance is also, I think, fundamentally different to crowd-sourcing, or citizen journalism. They don’t aim to tap into participants’ wisdom or knowledge; nor to turn them into amateur investigators. There are few heroic Erin Brockoviches here. Instead the network as a whole harnesses hundreds of small, repetitive acts of observation, and the empowerment of its participants comes from their collective efforts being so much greater than the sum of its parts. This means that we still need investigators, researchers and journalists to make sense of the fruits of networked sousveillance. The best sousveillance participants are focussed obsessives; investigators have instead to be magpies, picking and assembling from sousveillance networks, informants, and information leaked or prised from the state’s own information gathering. The plane spotters alone, for instance, couldn’t have exposed the infrastructure of unlawful rendition without testimonies from individual detainees to corroborate suspicious flight plans; civil aviation and company records to trace the ownership and provenance of suspicious planes; litigation and freedom of information requests to prove their suppositions about government complicity. But without them really intending it, their humble network of eyes (electronic and real) has furnished a gaze as unblinking and powerful as the most powerful governments. And as collective action, it seems to me that this quiet OCD is often easily as effective as any strike or demonstration.

—–
**Incidentally (although it’s different to the kind of networked souveillance discussed above): if there’s something pleasingly symmetrical about literally gazing back at governments’ eyes in the sky, it’s also becoming economically feasible for non-governmental researchers to acquire 20cm-resolution satellite imagery from commercial satellites – around 200 quid for a 5km-square image, or a bit more if it’s newly commissioned imagery. 20cm isn’t spy-satellite-grade, but it is good enough to allow amateurs, essentially, to spot smuggled tanks, map bombing raids and village burnings, identify new oil exploration, or spot nuclear submarines.